Brought to you by Broker4Tickets and Pro Hockey Life, I’m proud to announce our first ever CRHL monthly MVP! Lee Kelly with the Westend Warriors was nominated by his fellow captain Lucas Ferron.

Sleezy, as the Westend Warriors call him, has for years been an unbelievable glue guy in the room and a leader by example on the ice. His hard work and dedication to the Westend Warriors Hockey Club have endeared him to team mates and opponents alike. It doesn’t hurt that he’s one of the most humble guys you’ll ever meet.

After being in the league for 10 years, the Westend Warriors like to do lots of little things that add up to an unforgettable hockey experience, much like the CRHL has been trying to do since it’s rebranding a few short years ago. For example, they organize team dinners, team parties, team tennis tournaments, new team uniforms, and on and on and on. Usually, though, they’re organized by committee. This past Tuesday, Sleezy took it upon himself to surprise the entire team with custom helmet decals at no cost to anyone. Paired with the new uniforms they bought last year, this was really the last step to really looking sharp out there on the ice but at the time they just didn’t have the extra money for them. The important thing here is that no one asked him to do this, he just did it out of the goodness of his heart. On top of that, he just had a new baby at the start of the month and he somehow found a way to squeeze a few extra bucks together for the boys. He received an $80 gift card for a pair of Sens tickets and $20 to Pro Hockey Life, and a beer to boot. Congrats on winning the September MVP and becoming a new father!

Catch the Westend Warriors in action at the Bell Sensplex this Sunday at 10:00pm as they look to make a push for the Div 4 crown. 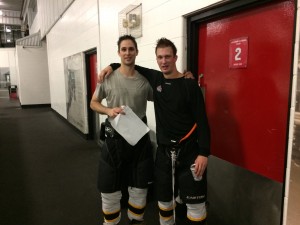